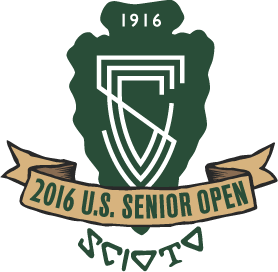 This August, Scioto Country Club will add a new chapter to its heritage as only one of four U.S. clubs to host five different major championships. The U.S. Senior Open Championship is the most prestigious senior golf tournament in the world, serving as our country’s national championship for players 50 and over and hosting an international field. History will be made at Scioto Country Club.

Not to be missed… over 100,000 spectators are expected to converge upon Upper Arlington throughout Championship week to watch champions of the game like Fred Couples, Bernhard Langer, John Daly, Colin Montgomery and Tom Watson vie for the historic Francis D. Ouimet Trophy over four days of play. Two thousand volunteers will make an incredible impact to ensure a remarkable week. And the Championship will feature 18 hours of live television coverage on FOX, with international broadcast distribution to over 100 countries. Needless to say, Columbus will again be put on the sports map at historic Scioto Country Club.

It takes everything to BE LEGENDARY. See the players, the course and Major Championship history at the U.S. Senior Open this August 8 – 14!

Field: 156 Professionals and Amateurs (over the age of 50)